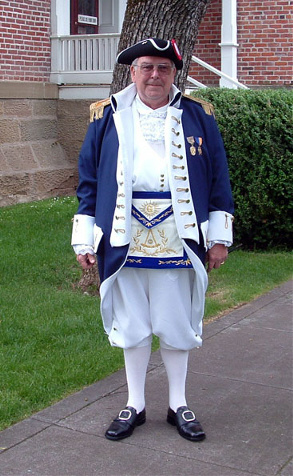 Rogue Valley Chapter #538 received it’s charter on February 21, 2005, President’s Day. We had 26 charter members. Our Chapter was once Camp White Chapter #170 chartered in 1942, it dissolved in 1946. Our first President was COL. Charles Hurlbut II, who took us through the growing pains of becoming a chartered Chapter, CSM Bill Best, took on the job of Secretary. COL Hurlbut moved to California in April 2005. In March 2005 we elected LTjg Jackie Adams, President. CSM Best continues as Secretary.

Camp White, near Rogue River in southern Oregon, was north of Medford and was named in honor of George Ared White. White was born in Illinois July 18, 1881. When but a youth he became interested in military life and served in the Spanish-American War. He came to Oregon from the Rocky Mountain states in 1904 and joined the staff of the Oregonian. In 1915 White became adjutant general for Oregon and from that time on his rise in military rank was remarkable. He served with distinction in WWI. Successively he held more important positions and was Major General in Command of the 41st Division when that organization was called into the federal service September 16, 1940.

During WWII the camp had over 900 buildings and trained 10′s of thousands of soldiers in basic combat training (BCT). It also housed POW’s.

The members decided that since Camp White was sold after the end of WWII and since we draw members from the Rogue Valley we would name our Chapter accordingly.

All that is left of the old Camp White is the hospital complex which in 1948 was turned over to the Veterans Administration for a domiciliary facility. The domiciliary is home to the Camp White Museum.

Many of the soldiers who were trained at Camp White met their wives in the local area. Upon returning from WWII they settled down in this area. The unincorporated city of White City is developing on the old camp site.