Because so many of its members had ties to Camp Adair, the chapter met one month in Corvallis for a ‘men only’ breakfast meeting. The following month, the chapter would meet in Salem for a dinner meeting with their ladies. This format changed after several years due to loss of meeting places and now holds luncheon meetings on the 3rd Wednesday each month in Salem. 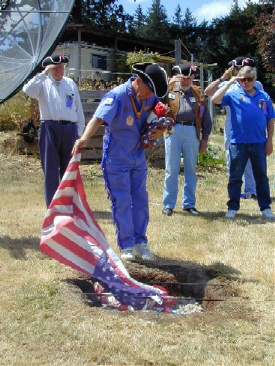 This chapter has grown to be the largest in the state and is an active chapter participating in most of the programs offered by National Sojourners, Inc. It supports ROTC medal presentations at Oregon State University and the University of Oregon as well as high school ROTC programs at N. Salem, Bend, Madras, Prineville, and LaPine. It is supporting the sending deserving juniors in high school to ‘Youth Leadership’ training on Americanism. It presents several patriotic programs ‘Building of the Flag’ and ‘Historic Flags’, and flag talks like: ‘Old Glory Speaks’ and ‘Toast to the Flag’, throughout the state. Their members conduct flag escorts during many Masonic Grand sessions.

The chapter is the parent of Camp Adair Camp, Heroes of ’76. Following the formation of the chapter and while deciding what the name of their heroes Camp should be, a notable irony occurred. Although several different names were suggested, in was unanimously decided to name it Camp Adair Camp after the army camp that was nearby during WWII. The irony comes from the fact that unbeknown to them at the time, when Camp Adair Chapter #191 existed, its’ camp was called ‘Willamette Camp’. Thus we continue the roots almost intact.

During their annual Encampment of all the Camps in Oregon, they perform a ‘Flag Disposal Ceremony’. Here they ceremoniously dispose of American flags collected during the year that have become ragged or torn, or have served their purpose and require proper disposal.