Much the same as many chapters of National Sojourners, Willamette Valley #529 has its roots from Camp Adair Chapter #191 organized at Camp Adair, outside Corvallis, OR in 1943. Since many men who were drawn into WWII were Masons in their home towns, it was only natural for them to form a chapter while they trained during the formation of four different Army Divisions. However, following their deployment the chapter was dissolved in 1944. 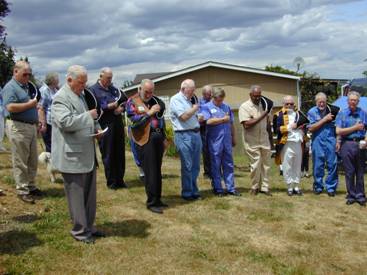 Shortly after his retirement to the Willamette valley in late 1991, CDR Stan Miller, USN Retired, an active Sojourner and National Officer, began presenting one of National Sojourners Americanism programs entitled ‘Building of the Flag’. The program was widely accepted and many members of the craft desired to also join National Sojourners. Since the only chapter that still existed in Oregon was now Portland #75 and many of the new members resided in the mid to lower valley, Willamette Valley #529 was formed in late 1992 and chartered on 19 June 1993 during the National Convention at Louisville, KY.